​
Knightsbridge Business Sales Ltd (KBS) and KBS Corporate Sales Ltd (KBSC) are owned by  K3 Capital Group Plc which listed on AIM in April 2017 (AIM:K3C). ​​KBS typically sells businesses of up to £500K in value and KBSC handles the sale of businesses they value at over £500K (up to about £5m)​. Both companies "​cover all sectors including retail, catering, care, commercial, licenced and leisure markets".

We've collected some information about these business broker companies below which should be of interest to business owners considering instructing KBS or KBSC to sell their business. This page was created in January 2018. However, please note that ​some of this information may be dated. Please seek the most current information and conduct your own research​. Please also see our guide to interpreting reviews.

The fees for KBS similarly,  and to the best of our knowledge, vary from business to business​ but are significantly lower than the equivalent KBSC charges. The fee structure, however, is the same with an advance fee and a success fee.

Our Summary: From conversations we've had with clients who've used ​these two companies, the feedback is varied. ​We've reproduced below a two week extract from our monitoring of the Knightsbridgeplc.com LinkedIn account showing no less than six price reductions over that period. If that rate were sustained over the year it would be 156 price reductions ​on a listing base of 871 businesses (as p​er ​KBS at Daltons in Jan 2018).

It may be the case that their initial valuations are on the higher side forcing later price reductions. ​However, Knightsbridge have claimed to us that at their initial consultancy meeting with clients the figures they provide are "from both a conservative and aspirational point rather than a specific valuation".

Reviews for these two companies are a little trickier to find and filter partly because of the different names used in referring to them​ including:
- "KBS" is used in some places to​ refer to both companies;
- KBS Corporate Sales Ltd was previously called Knightsbridge Business Sales Ltd (!);
- Knightsbridge Business Sales Ltd was previously called KBS Corp Ltd (up to 2014).

This is further complicated by the fact that there's a​n estate agency and other companies using the letters KBS in their name. As such, note that some of the reviews listed at the below destinations may not be for the company you think but for a different company altogether!

There seem to be no reviews for either company at Reviews.io, TrustPilot, ComplaintsBoard.com, TouchLocal, Scoot, Glassdoor, eOpinions, Feefo or Yelp.

Google seems to be the only location with reviews:
Google​ (see right column of search results): The company has 27 reviews with an average rating of 4.0 out of 5.

We did however find an article in the Mirror, copy below, where the journalist is not happy with the​ £995 plus VAT withdrawal fee.

​There is a complaint at RipoffReport, but KBS have replied to that and the complaint may have been resolved to the client's satisfaction.

Jobs: KBS often advertises sales positions for sales executives whose responsibility it is to speak with business owners and convince them to list their business with KBS. The last such job is being advertised currently with a salary of £15K - £20K and OTE of £19K - £35K. 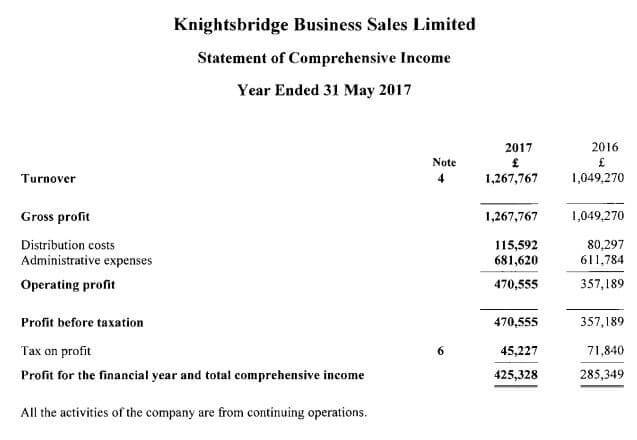 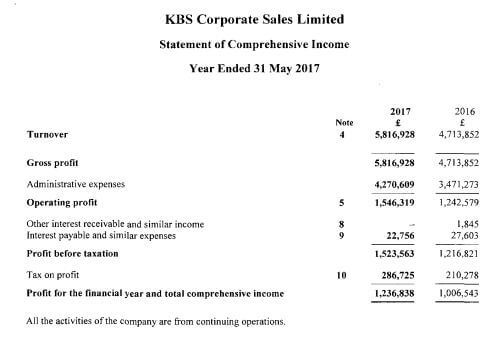 Market Presence: The KBS group is one of the UK's largest business brokers by number of listings. KBS has a total of 871 businesses for sale at Daltons out of which 230 are currently showing as "Price reduced". Businesses range in size from some that are below £50K in turnover to one that is listed with a turnover of £856K. There were 50 new listings added in the last 30 days.

​One of the ways in which KBS Corporate get business is by sending out thousands of emails to businesses claiming that there's a ​large demand for businesses like theirs. The emails tend to not be very targeted. We've seen emails arriving at general email addresses such as sales@ and info@.

​An extract from one of their emails (full sample available here​):

Could your company sell to an overseas buyer?

The UK M&A market has reached record breaking levels in recent years, and with
the number of sales in the mid-market arena exceeding 1,500 in 2016, we believe
that now is the perfect time to capitalise on the favourable market conditions
and consider the sale of ​(XXXXXXXX - company name removed) Ltd.

With 20 years' experience completing company transactions, KBS Corporate has
developed a unique and bespoke approach to fulfil your sale objectives and
deliver maximum value for your company.

​The emails come from multiple domains such as​ kbscorporate.exvm.com , ​kbs-corporate.online etc., and can be quite frequent - 30+ a year (see image below). However, every email does have an unsubscribe option. ​ 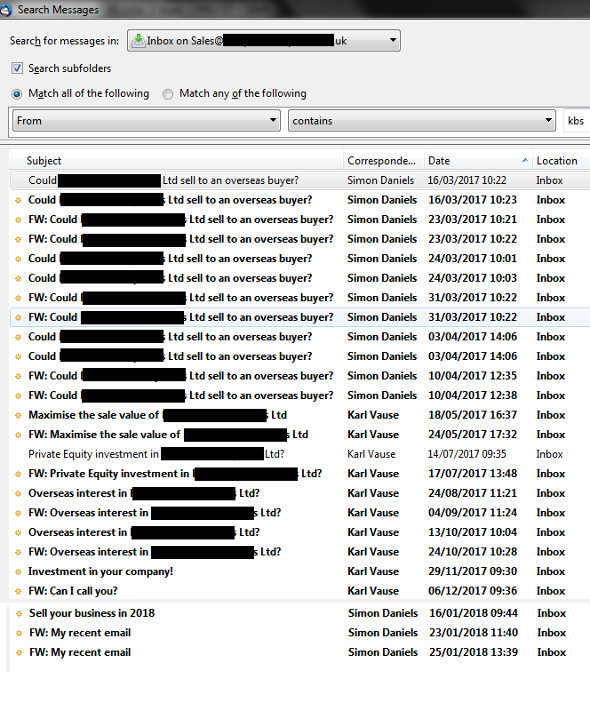 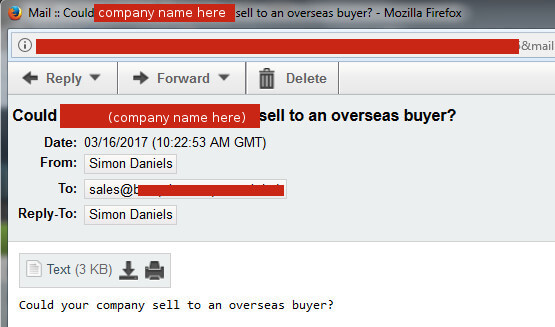 Extracts From The KBSC Contract​​

​As per the above, the contract is open ended i.e. if the business owners fail to cancel the contract in a specific way they will be liable to pay the "success fee" even if they sell their business several years later through their own efforts. Minimum lock-in period, however, is just six months which we consider very reasonable. ​ 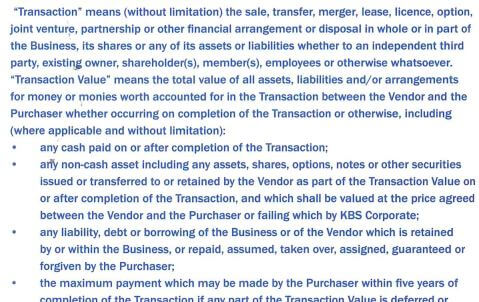 ​​Not that long ago, this company went public and are now listed on AIM as K3​ Capital Group Plc. As a public company they are required to disclose a lot more about their accounts than privately held companies. Their detailed 2019 report is available here [PDF]. Some extracts from that, and our observations, are below.

K3 boasts annual sales of £13.6 million, a considerable figure which puts them at the top of several league tables. Out of the £13.6 million, £8.1m was in advance fees and £5.5m was "success fees" earned on successful sale of businesses.

Circa 60% of their income is derived from retainers or advance fees charged. Given that the size of retainers tends to be modest compared with the size of success fees, this would suggest that the large majority of the businesses they take on, in excess of 90% of their client businesses by our calculation, fail to get sold.

​K3 member companies charge different fees to different clients based on the size of client business and other considerations. Assuming an average success fee of 2.5% (this is our estimate based on what we know of fees across the group), K3 have sold £220 million worth of businesses in this financial year. That's a significant number and makes them one of the leading brokers in the UK in terms of volume of successful sales (and number of sales).

But if the average sale was £5m (another estimate from us) that makes a total of 44 businesses sold in the year. Again, a big number as deals go, but not so impressive when one takes into account that the number of clients they were trying to sell over the year was circa 1,000.

Even more concerning is that, simultaneously, the percentage of revenue they earned from success fees has gone down. The £5m they made on success fees this year is a drop from the previous year!

"Due to various issues discussed later in this report, there has been a reduction of Transaction Fee income in the year to £5.4m."

Their current ability to earn more money from retainers may be in no small part to their increased marketing spend - a 9% increase to £1m for the year.

On Page 11, the report explains that the large part of their growth comes from the lower end of the market - smaller businesses. It would appear that larger business - mid market businesses with Enterprise Value of £5m and above - are increasingly going elsewhere (there are 1000+ other players in this market!) and this would suggest a lower performance for their KBS Corporate arm in the year to come.

This is surprising as they claim the increased marketing spend was to attract the larger businesses.

In Knightsbridge Commercial, the number of new clients taken on increased by 20% and the amount they earned on retainers increase by 121% (page 12). In KBS Corporate, earnings from retainers went up by 11%.

On the plus size, all branches of the firm are generating more meetings with buyers and more offers.

Disclaimer: As with any of our reviews we are always willing to make corrections / amendments if any errors are brought to our attention.

How To Find The Right Broker For Your Business​

There is no one size fits all. You need to find a broker that is right for YOUR business, but here is the problem. ​

Why you should never trust the free valuation brokers hand out​

​Brokers are generous with handing out valuations, but won't put in writing that they guarantee you that figure. It's because the valuation is usually a number plucked out of thin air!

​What a broker says and what he means are two different things. ​

Has he made claims about how many eager buyers he's got? About what a fantastic success rate he achieves? Well, you need to read this! ​

A lot of information about valuations is just not true. The value of your business is not ​based on what you think it's based on!

How can you sell your business for more than the valuation​

​We spill the beans.

Can an estate agent sell my business?

​Signed up with a broker and not getting many enquiries? Here's why:​

​​A light hearted look at the process from a buyer's point of view: The ​trouble with brokers...

​We can tell you whether a broker is the right choice for your business and guide you to the right brokers. We can also give you unbiased advice on the alternatives to brokers. 100% Confidential.